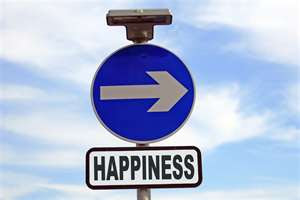 Happiness has been in the news lately. My own town of Somerville, MA is the first city in the USA to include questions about happiness in its local census. One of the research goals is to find out what local factors may be related to a person’s state of well-being. http://www.nytimes.com/2011/05/01/us/01happiness.html. In England and France similar questions are being asked.

Gretchen Rubin in her best selling book, The Happiness Project, and a similarly named blog http://www.happiness-project.com/ shares her ten personal commandments for happiness and a slew of articles that translate her abstract principles into the practical.

Last week, in our local paper, Richard Griffin expanded the concept into “Elements for bringing happiness in later life.” http://www.wickedlocal.com/somerville/news/x311054268/Griffin-Apply-Somervilles-happiness-survey-to-later-life#axzz1PImWVPem.

I remember what a sensation Charles M. Schultz’ Happiness is a Warm Puppy (1962) caused. It was a book of sweet aphorisms all beginning with “Happiness is…” (first edition available on Ebay for $130), We all came up with our own versions. It’s natural that satire would also result from this sappy concept. Apparently, the Beatles song, “Happiness is a warm gun,” was inspired by the cover of a gun magazine (probably not satire). http://en.wikipedia.org/wiki/Happiness_Is_a_Warm_Gun.

But an interest in happiness is rooted in our own “Declaration of Independence.” We hold these truths to be self-evident, that all men are created equal, that they are endowed by their Creator with certain unalienable rights, that among these are life, liberty and the pursuit of happiness. http://www.earlyamerica.com/earlyamerica/freedom/doi/text.html

Is happiness always a desirable state? According a research brief in the June 2011 Monitor (American Psychological Association, http://www.apa.org/monitor/2011/06/inbrief.aspx ), “Happiness may not fend off depression in Asian cultures as it does in Western cultures” because happiness may be seen as a “precursor to jealousy and disharmony with friends and family.”

Research also suggests that genetics plays a part in about half of our ability to be happy. http://www.dailygalaxy.com/my_weblog/2008/11/the-happiness-i.html. That still leaves the other half.

And then there is spiritual enlightenment. http://www.chopra.com/happinessrx.

I believe I am one of those people who tend more towards happiness, at least in this third halfof my life. I am told I was a very happy baby, I recall a generally happy childhood, followed by a supremely miserable adolescence, and a very up and down early adulthood. My best friend and I even charted our level of contentment from day to day. Our moods were generally a result of how well the boys we had our eye on responded to us. I eventually landed the target of my affection and fell in love (and then out of love); she did not. But she seems very happy now.

As a consequence of my natural disposition and relative good fortune (partly the result of good planning, partly of luck and geneti cs) I don’t find myself thinking about how I could be happier. I gravitate towards things that give me pleasure and meaning and away from things that bore me or irritate me. To some degree I put off the undesirable, from the daunting, such as the need to downsize, to the more mundane and every day, such as doctors’ appointments, housecleaning, and maintaining my email inbox. Spending time with good friends and family gives me great happiness, and those people need not be all sunshine and light themselves as long as they engage in life and take responsibility for their own actions. I am happy when I challenge myself and continue to grow as a person.

Thus, I am embarking on a new stage of my writing career that may take me away from this blog for awhile or severely limit my ability to create new entries. For the next year I will be part of a pilot program for novelists—those of us with a completed draft. We will share and receive critiques from our fellow students and instructors, analyze books already in print, and read about writing, among other activities. There may be times that the stress of reading nine draft novels not of our choosing in 10 weeks (in the summer no less), or hearing harsh words, or having assignments will not induce a state of happiness, especially on top of life’s other duties (such as paid work). I may wonder why I brought this burden on myself. But I do believe that in the end I will be happier for having stretched myself. And I might even find out whether getting a novel published will lead to that ultimate state of American nirvana, known as success.
Posted by Belle Brett at 6:57 PM No comments: