Having completed and revised a novel numerous times, I am now paralyzed at the next stage—the query letter. If one does not have connections, the query letter is deemed to be the main foot in the agent’s door. It needs to be perfect. But what does perfection look like when the advice and examples do not agree?

Here are the indisputable points:
• Addressed to a specific person at a specific agency, using a formal salutation (Mr. or Ms.)—include their title, name of agency, full address (unless emailed)
• Agent chosen after researching appropriateness of agency and agent because of your type of book
• Clean grammar, no typos
• Focuses on one project not multiple projects
• Concerns a finished novel only
• Gives title of novel
• Gives approximate length of the novel
• Provides a quick overview of writer’s key credentials—special qualifications for writing this particular book and your fiction credits
• Better to keep to a page
• Avoid gimmicks.

Here are some areas where the experts diverge:
• Giving genre? Most want this, but some say leave it out if you can’t slot yourself into one of the standard genres. Avoid the use of the word “mainstream?”
• Reason for selecting an agent, such as referring to books they’ve published that are similar to yours?
• Where to begin—plunge right with a hook? Begin with “I am currently seeking an agent for my completed x word genre book [give title]. Pose a rhetorical question—what if…. (some agents hate these). Expository description of something about the book—setting and time period?
• Focus only on the main character (or protagonist and antagonist) or share something about other characters who may be key to the story?
• Themes of novel? Again, some agents do not want to be told this, but want it to come through in whatever else you write about your novel
• Include non-fiction publications?
• Compare your novel to others out there? (But don’t compare yourself to well-known great literature or best sellers….)

As a former career counselor, I advised my clients to put their energy into networking rather than answering ads or worse, sending cover letters into the abyss of organizations. To minimize the query dance, I’m seeing the parallels with the publishing world. It’s hard work, as I recall. On the one hand,there is a certain satisfaction to saying I sent out 20 or 100 letters, but if none of them yields anything, you have faced 20-100 rejections. Perhaps it is better to spend your time cultivating a few contacts for whom you are more than a page of type and from whom you may at least get an honest response.
Posted by Belle Brett at 1:28 PM 2 comments:

On Setting Stories in Other Times 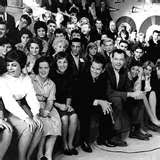 I was going to write this blog about the genesis of my young adult novel, and its many incarnations, but instead I want to muse about fiction that takes place in time periods that are still within living memory of many adults. At a workshop several years ago, the leader told me that unless one was writing true historical fiction it was better to make one’s story contemporary, with the rationale that it could more easily be adapted to the screen.

But there are several reasons for choosing another time. The most obvious, of course, is when the events of a particular period are the catalyst for the story itself. The Civil Rights era, and the events of 1963-64, provide the backdrop of the novel to which the characters in my young adult novel respond. One of the characters makes a choice that today might not create as much of a stir as it did then. Some of their problems, though commonly recognized today, had not yet been given names, like bulimia, or attention deficit disorder (whose name keeps evolving.) But teenagers, now as well as then, are notorious for hiding those things of which they are ashamed. Could this story have been set in 2010? I’d like to believe that the concerns of each of the three main characters are timeless, even if the context is different, but I believe the story would lose some of its color (pardon the pun) and interest. After all, stories set in other time periods can be instructive to those reading them—letting them into other worlds and mindsets.

Second, even if the story is not shaped so much by external events, it may be that another time offers some perspectives that make the characters and plot more believable. I had always seen my Japan novel as occurring in 1981, but after the aforementioned workshop, I changed it to the present where it stayed through its many revisions. But meanwhile Japanese society was becoming less patriarchal, the economy was slumping, and the foreign bar hostess was almost a cliché. Having decided I’d followed advice that wasn’t working for me, I needed to go back and review every page for anachronisms (e.g. cell phones), edifices that had not yet been built, relationships to historical events, clothing choices, and the less obvious, such as attitudes. Fortunately, the Internet allowed me to find out that karaoke had just come on the scene in 1981 (but would have been unknown to my American protagonist) and that I could replace a fun park (not yet in existence) with a brand new mall with specialty shops. I could also refer to a kitschier time for love hotels (think themed), make the difference between men’s and women’s roles more stark, and portray my Japanese customers more prosperous. I chose 1981 for quite specific reasons—it was a period when women in particular were flocking to business schools for the first time, but the corporate world, especially in a place like Japan, was less responsive to women on the rise. Although computers were a part of the workplace, personal computers as a common household item were a few years’ off. Cell phones also did not exist. Thus, communications could be awkward. Finally, 1981 was pre-AIDs awareness.

Third, the author may be familiar with a particular time and have the memories and perhaps even the evidence to create a credible world. With my Japan novel, I was able to draw on the descriptions of places, food, people, and events from my journals of a slightly earlier trip to Japan and feel that I wouldn’t be too out of date. First-hand knowledge also shaped my young adult novel .

Finally, of course, in the story that extends over a number of years, history will probably intersect with the story in some way. Movies that spring to mind are “The Way We Were” or “Forest Gump” or even “Same Time Next Year,” in which the characters express themselves in ways that reflect the times.

Whatever the rationale for choosing to write about another period of history, authenticity is important, and research, crucial, to get the details right, including slang. In fact, one can argue that a book intentionally set at an earlier time may become less dated than one written as a contemporary tale. Even that modern story will eventually become historical. Some will stand the test of time, and some won’t.

So I convinced myself to stop worrying about the screenplay—if it’s so compelling that someone wants to buy the rights, they’ll figure out a way to make it happen.
Posted by Belle Brett at 6:54 PM No comments: