On the Promise of Spring 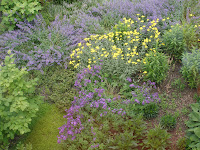 Lorraine never knew what awaited her in the garden in those pubescent days of spring. In preparation for the long New England winter, she had cut back the spent shoots, with their brown leaves and mummified flowers but left the plants that seemed to have a vestige of life. Eventually, these too lost their color and began to rejoin the earth. Only the sea grasses, turned straw color, and the small crabapples clinging to bare branches, managed to maintain any visual interest. Finally, when the ground was no longer frozen towards the end of March, she surveyed the tiny urban landscape to determine what work was needed to ready it for the new season’s display.

It didn’t look too daunting at first. With a rusted rake left in the garage by previous owners, she clawed at the masses of tangled twigs of the dead catmint and spirolina and found underneath the drooping leaves of tulips struggling for sunlight. She’d forgotten about the tulips. They flowered so early and then disappeared, but now they were a welcome surprise as she anticipated their yellow and purple cups opening up to the sky.

Lorraine stepped more gingerly now, especially once she noticed the offspring of the twigs poking their delicate red-rouged tips through the soil. Although she found herself perusing the Southern California and Hawaii real estate listings during winters when she and Joe buried the garden with snow from the driveway, she had to admit she would miss the more dramatic change of seasons, especially the promise of spring. The way the flowers and the plants would reappear despite her complete neglect for months made her feel that anything was possible. At the end of May when the grape arbor was still not showing much signs of life, she would be convinced it had finally died, and then leaf by leaf it would return until it was so bushy she had to prune it.

Those acts gave her faith that she wasn’t that old, that maybe even her best years were ahead. Some people started whole new careers at 60. One of her high school classmates had left a respectable professorship to make cheese. Another had sold his business and was building wooden Dory boats. She fancied herself a writer, perhaps a poet. The garden kept her dreams of renewal alive.

***
The above is an excerpt from a story I wrote the first full year I threw myself into writing. Interestingly, my garden was also somewhat new at the time. I like readying it for its all too short growth season. In addition to the sheer joy of being in the fresh air after a housebound winter and of using muscles in ways the gym never quite replicates, I find the creative juices stirring there. Maybe, as Lorraine says it is the “promise of spring,” a chance to shed one’s layers and begin anew. There is something about the longer days, the brighter light, the multiple shades of green, that energize the spirit.

I have been productive these last few months—I’ve about finished a draft of another novel, started this blog, researched my list of agents, and sent out a few queries, but in truth, I think I feel more like a writer this time of year. However, without moving to a land of eternal sunshine, perpetual flowers and warm breezes (though I love Hawaii), I want it to be spring in my mind all the time, to feel confident in this new choice, to let go of any fear of failure.

In her book, The Third Chapter: Passion, Risk and Adventure in the 25 Years after 50 (Farrar, Straus, and Giroux, 2009), Sarah Lawrence-Lightfoot shares stories of people who have reinvented themselves after age 50. She talks about “going home,” replaying experiences from childhood and using new opportunities to heal earlier pain. It wasn’t until recently that I realized I “wrote” all the time as a child. I didn’t actually write down the stories I created, but I talked them out loud as I illustrated them in pencil. Alas, most of these were lost after my parents moved, but I remember a theme of hope that permeated them—poor into rich, plain into beautiful, lonely into accepted—each a story of longing and then fulfillment. Now I, the adult in my third chapter, owe it to that budding writer of so long ago to realize her dreams, and like that child and like the gardener, enjoy the journey itself, with all its effort and promise.
Posted by Belle Brett at 1:21 PM