On Martinis and Mozart 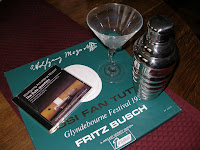 My dad, George Fairburn Brett, died 14 years ago today at age 91. His life spanned most of the 20th century. He was born not long after the Wright Brothers successfully flew their plane at Kitty Hawk, saw our world shrink first through radio and then television, witnessed a man landing on the moon, lived through two world wars (too young to fight in the first, too old for the second), and the Great Depression. I wonder what he would have made of the socially networked world, what he would have thought of the possibility that he might not have his daily paper to hold in his hand. Interestingly, although he was a physicist by training and worked in the electronics industry his whole life, he never quite grasped the importance or potential of computers or how they would change people’s lives. His very considerable brain power started failing just as personal computers were coming into their own. His vote for the greatest invention of the last 150 years would go to the internal combustion engine.

I tried to imagine what he would have said about himself on his Facebook page though I believe even in his full right mind he would have pooh-poohed the concept. But here is my best guess (with a few additional categories thrown in).

Activities: Listening to music standing up, walking briskly, tinkering with the hi-fi and putting together “Heathkits,” making wine (and drinking it), intellectual conversation, reading, musing, composing doggerel, writing letters, sitting in the sun, traveling for business until age 65 when replaced by imagining what the neighbors are up to and schmoozing at the pub.

Favorite TV shows: Even though involved with the development of color TV, haven’t watched TV since the 1950s, except for Wimbledon tennis and the news. Did enjoy “Your Show of Shows” (Sid Ceasar) and Milton Berle once upon a time.

Favorite trip: Travelling around the US by train in 1928, including the Grand Canyon.

Most proud of: Climbing to the top of Mount Rainier. Never having stayed in a hospital (except for a few tests) until those last few weeks.

What I’m most proud of about my children and grandchild: Beth’s prodigious talent and perseverance as a designer; Belle’s trip around the world in her 20s; Pippa’s Ph.D. in Physics.

Greatest regret: Not having sufficient talent to have learned a musical instrument. Not having seen more of the world.

About me: Born in Ipswich, England, January 11, 1904 . Oldest of five (one brother, three sisters). Family moved to Leeds. Mother into health food—nuts and dried fruit. Father, who left school at 12 to work in the coal mines, eventually became Lord Mayor of Leeds. Earned Ph.D. in Physics from Leeds University, did two post-docs, including one at the University of Michigan, setting in motion interest in returning to the USA. Finally had to take a real job at age 27. Worked in same company for whole career: Marconi Co., which later became English Electric, which then became Marconi again before its eventual demise. Moved from the bench to patents in the 1940s. Married to Josephine Carlton, artist and art teacher, in 1943. During WWII, worked on development of radar. Two daughters. Finally landed job of dreams, 3000 miles away from boss, as liaison with the American electronics industry and eventually a VP, enjoying the aforementioned first class travel and three martini lunches. Lived in Lancaster and later Philadelphia, Pennsylvania 1950-1968. Retired to London in 1968 to live a life of Riley.


Perhaps it is unfair of me, the daughter, to reveal my father in a way he might not publicly have done so himself. He was not one to laud his achievements. He was as harsh on himself as he could be about others and didn’t want to do anything if he was going to be second rate. But my gift to him is a web presence. And while it is not the sum of us, who are we these days if we cannot be found through Googling our names?

So as I raise my martini glass while listening to a little Mozart, I thank you, Dad, for what I got from you—a fast walking pace, a good immune system, curiosity about the world, a love of language, a healthy dose of cynicism, and a penchant for musing. (I could have done without the bad feet and impossible high standards that sometimes keep me from taking chances). But unlike you at my age, I see a life ahead of me full of possibilities, a life enhanced greatly by my computer. Although you did not believe in God nor an afterlife, I want to think that somewhere in the great beyond, you are urging me on to go forth, make my mark, and hang the critics, including those inside my head.
Posted by Belle Brett at 11:37 AM