On Who and What I am Thankful for as a Writer 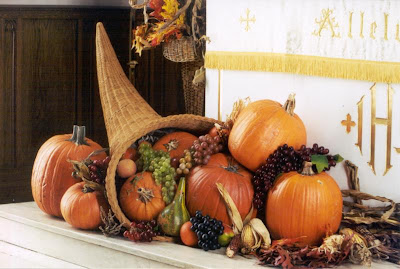 In no particular order—

• Grub Street Writers, which has offered so many outstanding classes related to writing and publishing and allowed me to develop my craft.

• My bi-weekly writers’ group--Burns, Lisa, and Shellie, who have provided ongoing support and feedback, five pages at a time and have kept me moving along.

• My friends and family, especially Michael, Buki, and John, who have regularly read and critiqued large hunks of my work and have given me encouragement, love, and ideas.

• My Gina in the Floating World readers—Pippa, Susan, and Donna—who took the time to read an entire draft of my novel and pushed me along on the revision process.

• My teachers at Friends’ Central School, who taught me the fundamentals of how to write, oh so many years ago.

• Michael Neff for giving me an initial boost regarding the potential of “Gina” and then publishing my first short story in Del Sol Review.

• Jackie for being my partner in screenwriting and the adventures that shaped my second novel, as well as for her detailed critique.

• The Internet, for making it so easy to access information on any topic imaginable.

• All those interesting blogs by other writers that help me connect to a community of writers and feel reassured that others are going through what I am going through.

• Computers and word processing for allowing the words to flow more easily onto the page.

• Boston area for being such a rich resource for writers.

• My thesaurus (the book version) for expanding my vocabulary.

• Great writers and books for inspiring me.

• You, my friends and readers, for having faith in me!
Posted by Belle Brett at 8:28 AM No comments:

On Paradise as Muse

Why I will return to Hawaii- 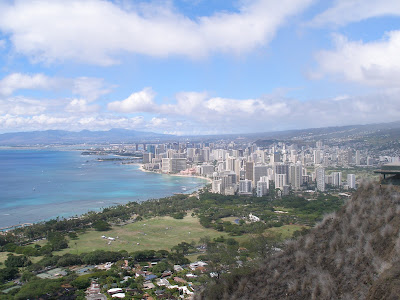 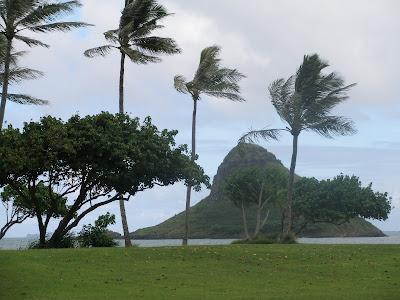 3. Exotic wildlife--large (a manta ray with diver a Sea Life Park, Ohahu, but we had a personal visit from a manta ray in our cove on the Big Island) 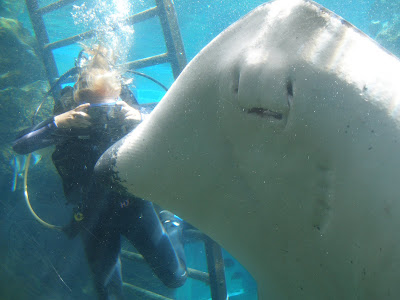 --and small (lizard on our door stoop, Big Island) 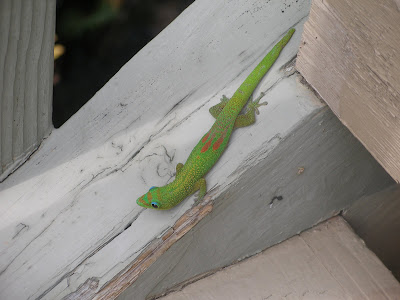 4. Colorful plantlife (some kind of bromeliad) 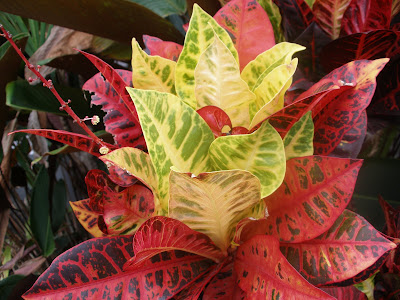 5. A unique history (the Place of Refuge, Big Island) 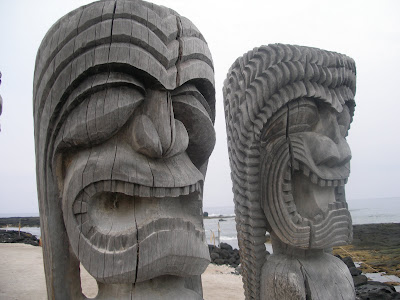 6. Its own brand of architecture (the Painted Church, Big Island) 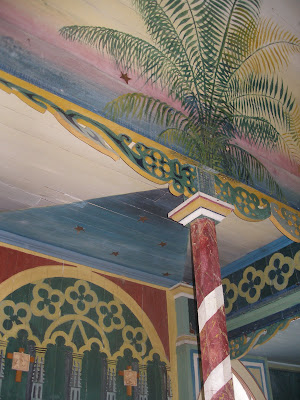 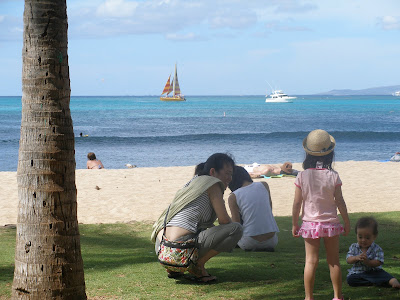 9. People marching to their own drummers (or eyewear!)(Pakani Grill, Waimea, Big Island; reminds me of the colorful costumes on Halloween night in Chinatown in Honolulu) 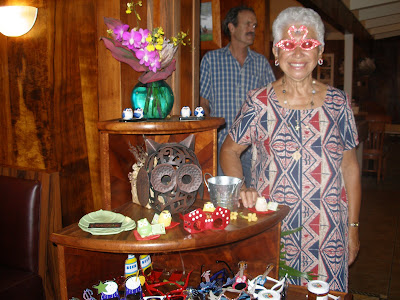 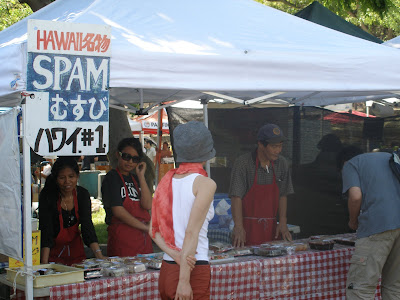 11. The view off our private deck (Kealakekua Bay, Big Island) 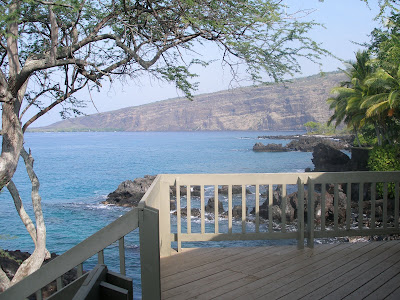 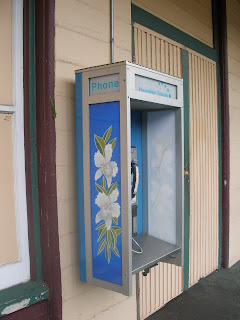 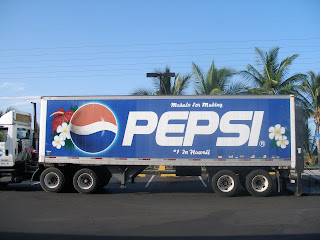 Posted by Belle Brett at 6:17 PM No comments:

On Blog Block and the Perils of Revision

Dear Reader (and I know there were a few of you out there), I have been a terrible blogger these last few months, and I owe you an explanation, knowing I may have lost you to more faithful writers. Initially, I had an excuse. I even told you about it. I was working on the second draft on my novel, with a deadline of Labor Day imposed by my friend, who had agreed to read it through before the crush of her fall semester as a professor began. I'm good with deadlines. After I returned from our Jersey shore retreat, I buckled under, wrote for several hours each day after work and most weekends, and sent off the 450+ re-tuned pages that second week in September. I was also subsumed in an intense report writing phase of work--creative writing was my own "busman's holiday." (Does anyone use that phrase anymore, or is it remnant of my English upbringing?) I posted a few pictures of my garden (a symbol of my productivity?), scraps to assuage the hunger of the empty blog pages.

Following this two month burst, I gave myself a second reprieve from wordsmithing, trusting that the muse would return. But I had been in revision mode so long that my faucet of creativity had shut itself off. Not so much as a drip! I couldn't even write about the revision process itself, which for me was just a matter of considering the various pieces of feedback I'd received and plugging away. Nothing special to share. To maintain my illusion of being a writer, I faithfully went to my writers' group every two weeks, continuing to feed my colleagues previously written chapters and providing feedback to them in return. I attended readings, sat in on a session on writers' contracts, and even paid good money to participate in a full weekend workshop on "The Art of Language," where I froze in panic at having to complete an exercise involving substituting new words in a paragraph of an established writer's prose. On the second day of the workshop, I handed in the first two pages of my newly revised novel. It came back from the instructor filled with brackets indicating unnecessary words and a comment about the stakes feeling low. The stakes of my females middle-aged protagonist who was struggling with her novel! What a slap to the brain! I felt deflated but also armed with some new weapons in my revision arsenal. I would not let myself sink into a vat of self-pity (like my protagonist in one of my several attempts at rewriting the first two pages.)

In the meantime, I had heard from my friend--she loved the second two-thirds but included four single-spaced pages of suggestions about that first third. My husband, whom I nervously watched as he read the revision, had his own set of thoughts, also mostly about the beginning. (Blessedly, he stuck with the novel until he finished it, and I took this as a good sign that if it wasn't a page turner, it at least had a certain modicum of forward momentum.) So now I'm stuck. My homework is clear, except that it means more and more reworking of the same old material. Yet, what sense would it make to abandon something that is so close to completion? Or is it? It's reminds me of the waiting game. The longer you wait in line, the less likely you are to leave that line even though you may not be all that close to getting what you need. You have already committed so much time, to leave would be to admit that all the previous time was wasted.

I will finish that novel, but I need to give myself permission to do other writing for awhile, to not believe that I have abandoned the manuscript just because I don't want to deal with it just yet. I need to absolve myself of my guilt (or shame?), in order to move on.

So, dear reader, that is my story. It comes to you courtesy of a netbook with a nine-hour battery life and and an eight hour non-stop plane ride to Hawaii (but that is a story for another blog). I know there will be no tears shed for me upon that little confession. May my muse be waiting for me, mai tai in hand, on a lanai overlooking the deep blue Pacific. Until then...
Posted by Belle Brett at 6:39 PM No comments: